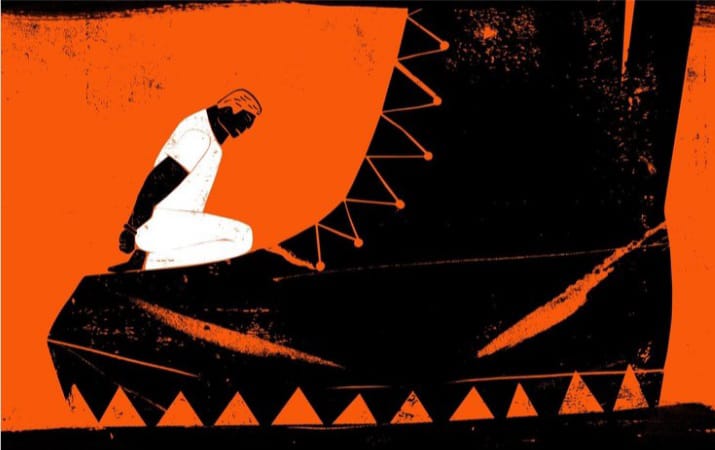 This past year, people outside have been revved up with footage of police shootings, and heavy handedness of law enforcement, yet they are oblivious to those of us who have found ourselves behind the hidden walls of American Justice System, where we are being killed too, one day at a time, death by incarceration.

With the defeat of President Trump, and the victory of Mr. Biden, even inside the large walls of New Jersey State Prison, a sense of hope is abounding. Yet, to me it is all a sham. I don’t see a change, I have argued as much in my previous article: RETRIBUTIVIST. Where I equated Hope to a mirage. Because, it raises its deceptive head during each election cycle, and then vanishes as soon as the winner is announced.

I am a skeptic for a reason. You see, I am perplexed by the duality of it all. On one hand, the policing and judicial systems are being labeled flawed and racist. On the other hand, we who have been crushed and abused by those very same entities are considered scum. Where so-called specialists such as academics, law enforcement personnel, lawyers, prosecutors, judges, politicians, civil rights movements’ leaders, and celebrities are talking, no one has ever attempted to speak to the prisoners in America. In reality, our complaints are considered unwarranted, and no matter how hard and loud we try to interject in a conversation about Criminal Justice Reform, our voices remain silent like a fish in an aquarium.

Because, unlike outside, in here there are no sensational videos that will shock the conscience of a collective society. So, please allow me to sneak you a peek, over the castle walls and the barbed wire fences, where racism is alive and the dead men walk.

I saw it with my own eyes at the Hudson County Correctional Facility, in Kearny. Where, while being locked up in Administrative Segregation (Ad-Seg) I witnessed an incident that changed me forever. I was still new in the system and believed in it. Yet, that episode showed me the real beast, and it left me fearful.

In Ad-Seg, we were locked in for 31 hours straight in a cold cell without any electric sockets, TV, or reading material. After that an inmate would get 1 hour of recreation time on the tier by himself. During that limited time, we could shower, make a 15 minute phones call, and boil some water to make a soup if we wanted. Suffice it to say, that the conditions were beyond horrible.

To protest the conditions, every now and then, some inmates would rip their blankets into small chunks and stuffed their toilets and blocked the bottom of their cell doors.. Then they would start flushing. When the water accumulated in the cell , they would unblock the doors. The result was an overflow that would flood the main tier. It was aptly called, “flooding the cells.”

One of the most notorious”flooders” was a guy named Africa. He was a Nigerian immigrant, awaiting deportation hearings. He was originally arrested for smoking a “joint” in his cab late one night. He posted his bail, $250, but at the intake after he received his clothing and stepped out of the door of the county jail, a plain clothed ICE officer placed him under arrest for alleged immigration violation. He was thus unceremoniously pushed back into the same door he had exited and reprocessed back into the facility by the same officer who laughed at him. In brief, Africa was extremely angry at the”system.”

To quell his obvious frustration, he would “flood” his cell at all times of the day and night, angering our unit officers. Even though the immigration detainees had their own separate housing unit, he was placed in Ad-Seg for allegedly making “terroristic threats” to a supervisor.

“Did you threaten him, Africa,” I asked him one day. “I called him a son of a bitch,” he said, “and told him that I hope you die of cholera!”

Yes, Africa was locked up in Ad-Seg due the use of the word “cholera”, that was somehow perceived to be a biological threat, a novel term, coined by the supervisor to teach Africa a lesson before he was sent back to his “bush”.

I couldn’t believe when I heard those terms from that supervisor as he stood before Africa’s cell and taunted him while his three subordinates laughed, two whom were African Americans.

In addition to his lockup status, Africa was given no blankets or toilet paper for the first 3 days. Although the dark grey blankets were more like thick curtains, nevertheless, not having any was hard because in those days, according to one officer, as per usual “Tactical Procedure” to keep inmates “docile”, the tier was kept extremely cold. So much so, that during the cold months of winter, the large industrial blowers blew frigid air inside, and the temperature dropped to a point where we could see our own breath.

“You ain’t got those back home,” said the supervisor when Africa requested a blanket, “You can do without.”

Of course, we, the fellow inmates, collectively helped Africa with his needs to the best of our capabilities. But, Africa was always angry, and made it known by kicking his door and flooding the tier.

One night, around 2:30 am, I woke up to the sounds of one of Africa’s tantrums. He shouted that he was freezing, as the large blowers blew cold air with such intensity that we could hardly hear what he was screaming. As I stepped to my door wiping my runny nose, wrapped in a blanket, I could feel the water under my feet. Africa had flooded again, and the water seeped into my cell from under the door.

As a response, officers called a “Code Blue”, a code for fighting, and a cadre of responding officers poured into the housing unit. But, there was no fight. They came in with riot gear, bullet proof vests, helmets, batons, and humongous cans of pepper spray. They rushed inside his room spraying; I covered my own face and counted 8 masked officers entering his cell. After a few minutes of loud banging noises and Africa’s incoherent screams they dragged him out on the cold floor. He was only wearing his soaking boxer briefs.

Multiple officers, all but one white, pounded his shivering body and legs with batons as he writhed in pain. Then, amazingly, and inexplicably, the same supervisor shouted and ordered his subordinates to subdue him. That resulted in officers stepping on Africa’s limbs with their black steel-toed boots. And slowly before my eyes, the supervisor held onto the wall with one hand and stepped on the side of Africa’s face with his full weight.

As our eyes met, I could see Africa’s face, his eyes wide, popping with fear of an impending doom.

I shook my head and banged on the door to join the protest of my fellow inmates on the housing unit. That was all we could do locked in. I then shouted and pleaded with the supervisor to get off his face. He just looked and smiled that vicious smile, and then finally stepped off ending that episode of American Justice.

Racism, folks, has a real physical affect. Those who have suffered it can attest to its very real grip. If you doubt it then go to any museum of African American History, or Google Slavery in America or the Civil Rights Era. You will come across many photographs of horrified Black faces, taking a beating, having dogs set upon, or being lynched, and you will notice those eyes, popping with fear of the impending doom.

The problem of racism is like cancer, it has deep roots. To fix it, in my humble opinion, the correct problem must first be identified at all levels. To prescribe a solution without such a root to stem probe, it is an exercise in futility.

I know captive voices are not welcomed, but the question remains, if cops can kill a person on LIVE footage, shooting, or slowly choking a man to death with their knees, all the while smiling with their hands tucked in their pockets, is it then hard to imagine that they lie on the stand or tamper with evidence to send innocent men to prison?