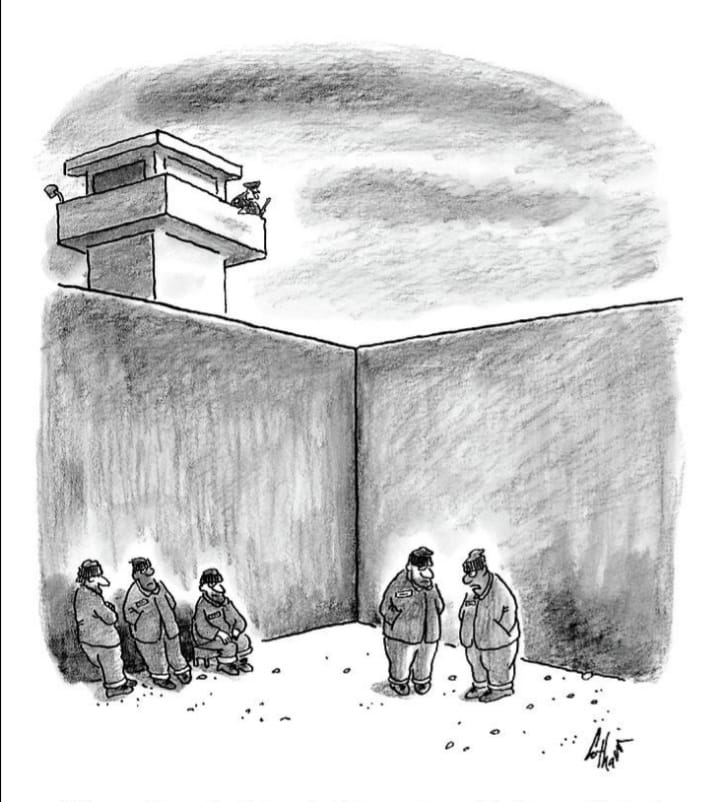 The “Big Yard” of the New Jersey State Prison is separated into four quadrants, aptly named “Quad” ‘1 to 4’. The entire concrete expanse of the yard is covered with a chain linked fence and barbed wires; which is further enveloped by the famous Leviathan of a wall that was built, perhaps, with the fort that housed George Washington’s troops crossing the Delaware River.

But seriously, walking within, past the sliding iron doors, and further surrounded by the massive prison structure, it gives an uneasy feeling of being encapsulated a la the “Russian Doll”. Even with the open sky, the claustrophobia is perceptible.

Along the southern wall there are row of houses that run into a McDonalds on one end. The very restricted view of the “Golden Arches” can be seen sideways from the two quadrants that are next to the southern wall. On the other hand, the sweet fragrance of the Big Mac and the McDonald fries is more of a liberating affair.

To the west, a grey, square church tower rises dwarfing even the big wall of the prison. Its Gothic architecture is plain to see with “Gargoyle” like small figurines decorating the four corners. I am rather quizzical about those ecclesiastical architecture choices but that is not the subject matter.

Anyhow, in the middle of the tower edifice there is a statue of ‘Mary’, her gaze lowered, she is glancing down serenely with a look of mercy, forgiveness, love, and perhaps a promise of a better tomorrow.

During summer months, right outside the prison walls, below the loving effigy of Mary, there are church events, talks, street fairs, concerts, Barbeques, voices of children and other merry-makers. I am talking proper festivities.

On other times the hustle and bustle of the city of Trenton is always around; as the prison is situated right in the middle of it, which constantly reminds us behind the walls about the subtleties of being alive. Yes, because that is what’s missing inside — life!

Sometimes I wonder whether people outside ever think of us in here or whether they even notice this prison. Or, is it as invisible to them as a fish in an aquarium.

You know what I am talking about right? The little exotic fish in that well-lit, full of bubbles, colorful aquarium. There are “oohs” and “aahhs” in the beginning and then it becomes almost invisible. Even feeding that damn fish inside becomes a chore. You forget, and every time you pass by the fish’s eyes follow you, the mouth opening and closing — screaming: I am still here.

In a way a prisoner’s life starts in a similar manner. A crime happens, investigations and sensational media reports are followed by the “oohs” and “aahhs” of the public reaction. Then the arrests are made and more “oohs” and “aahhs” follow, and finally convictions. The appeals that follow and the cries of injustice by the wrongly convicted are ignored as that fish in the aquarium — screaming: I am still here.

Walking the yard, I get this surreal feeling sometimes as if I don’t exist. With the cacophony of voices all around, I sort of feel like Patrick Swayze in that movie “Ghost”. I see, without anyone caring; I walk without anyone seeing me; I talk without anyone listening. Sentenced to literally die in prison; dead man walking.

As I walk, I hear a prisoner from the ‘Toastmasters’ program talking about the Virginia politicians’ “black-face” news. I wonder if those outraged with that scandal ever get offended by the tragedy of the incarcerated in this country. The charade they show outrage for is colorless. Yet the one within these walls take a peculiar hue of ebony and darker shades.

Epiphany! I suddenly look up and realize that I mistook her look. I hear a voice screaming in my head: There are no ‘glass houses’ anymore; they have built houses of stone and mortar!

Now I know why she is looking down. The messages of being ‘born again’ and preached opportunities to ‘absolved’, ring as hollow as the empty halls within that church. Mary’s gaze is lowered out of shame!

I have often wondered whether the walls of this prison were made to protect the society outside from us and our shameful acts, or whether these walls were erected to hide the shame of the society.

Food for thought I suppose — “I’ll be moving along now Mary”, I mumble. Because what do I know, I’m just a dead man walking.

0 comment on BIG YARD : WHERE THE DEAD MEN WALK