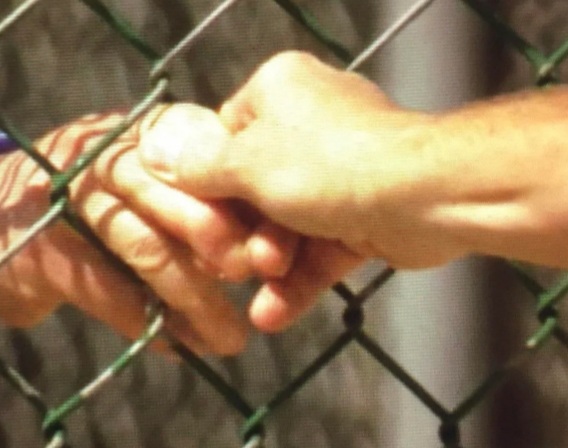 The handshake: a small gesture of humility that can symbolize equality and Peace by the clasping of right hands. The handshake represents humanity and demonstrates common grounds found between two humans.

The gesture is so important to us that during the pandemic you would see awkward elbow bumps in lieu of folks using hands instead of standing and doing nothing.

It wasn’t until my internment in New Jersey State Prison (NJSP) that I began to notice how significant a handshake was to being a human. What was so mundane was now something inmates would go to great lengths to execute. I found it comforting to see men who are considered less than human and locked in cages keeping this important tradition alive by all means necessary. Nowhere else is this act more frequently demonstrated than in the prison yard..

Broken up into 4 quads, the Big Yard of NJSP separates the inmates according to their housing units. And a surrounding 12 ft High fence, wrapped in razor wire, keeps the population segregated. However this doesn’t stop friends and even sometimes strangers from nodding heads and slipping two fingers through the chain link fence to signify the clasping of hands, the handshake.

On every yard movement, as members of our population begin to make their way to their quad, men share and greet each other at the entrance and risk a full stripped-down search just to remind each other that we are still human and are equal. And in the eyes of custody the simple gesture of handshakes through the fence means contraband is being passed. They’re eyes are  fixed on us hoping to find any reason to force us to undress and find something to prove that we are nothing more than animals who cannot be trusted.

Regardless of what they think we remind each other that we are still men deserving of camaraderie. Today, on my housing unit, where there more fences around each corridor, my friend Tariq walked by and noticed me on the other side of a fenced partition. The links of the fence were so small that I could barely each other as he slipped his fingers through the gap. It wasn’t but it wasn’t much but it was our handshake. His way of telling me we are friends, I see you and we are still human.